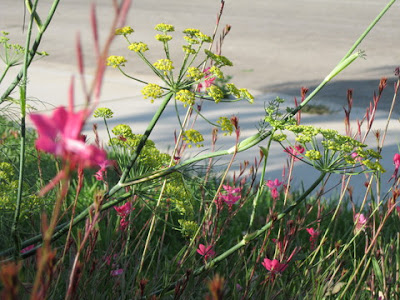 One of the shining stars of my front garden is my gaura – it is big, beautiful, and can be a real show stopper. The most important thing I’ve learned about planting these beauties, is to give them lots of room! They do get as big as they say, up to 3’x3’ depending on variety so they are definitely middle of the border perennials – NOT front of the border.

Your gaura will flower non-stop from April until the end of October and as I write this post starting the second week of December mine is still in bloom! This plant is great because it is drought tolerant and does not need a whole lot of care. 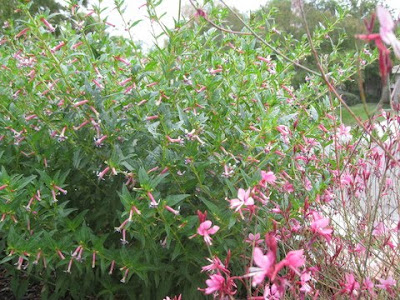 This photo shows how nicely Gaura works with other perennials like this Cuphea Starfire.

During the first year, you want to water your plant regularly, even keeping the soil somewhat moist during it’s first growing season. After that, you can water it only when it gets hot and dry (summer in Southern California). By low maintenance, I mean you don’t really need to do anything to it, however if you remove the dead flowers (dead head it) and remove seed heads during its blooming season you will increase the new blooms and prolong the blooming period. Fertilizing is also a good idea, try a nice balanced organic granular fertilizer monthly. Stop fertilizing when it gets cool (December) and start up again in spring. 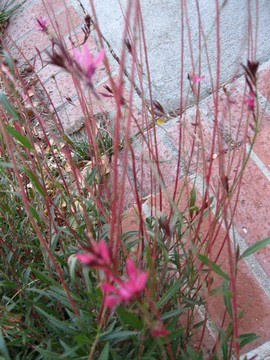 To maintain the size and shape of your gaura you should cut the plant down to 10 inches in the spring of its second season then thinning each spring after that. Your plant will branch out and become more like a shrub (perfect for the middle border). Thinning should be accomplished by removing excess growth (crossing and errant branches first). At the end of the blooming season the only thing you need to do is prune out dead or diseased foliage – which will help prevent pests and diseases.

So, you don’t need to do much now (December) but keep this in mind for the spring!

If you want to know more about me or my designs check out my website.