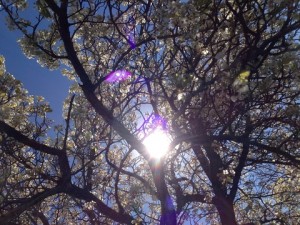 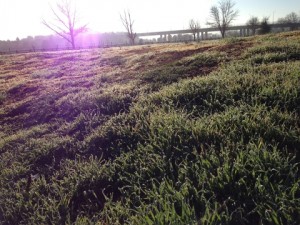 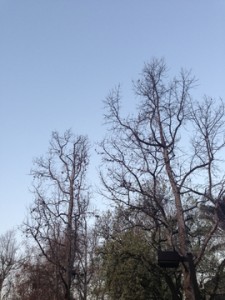 If you would like help beautifying your life, think about creating a garden with me. You can call me at 661-917-3521, or visit my website. 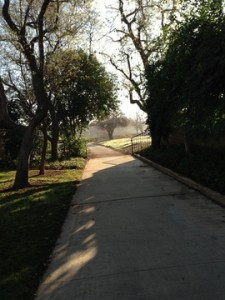 Being a landscape Designer in the Santa Clarita Valley, I know the value of inspiration and the winter in Southern California never fails to provide.  I have two wonderful dogs, and I enjoy a walk with them every day.  I enjoy the paseos around my home, the wash nearby, and of course Towsley Canyon and other trails.  I can’t always take the dogs with to Towsley (when it gets hot those rattlers come out) but they still have their morning walk regardless of where I end up later in the day.

Today I am going to take you on a February walk in photographs, and since I have quite a few of them – I’m going to use them as next week’s Wordless Wednesday too. 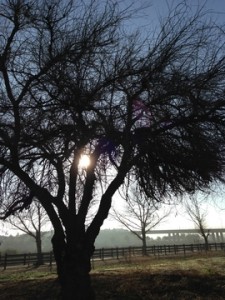 It is very important to pause and enjoy, to stop and “smell the roses” in life and on your life’s path.  If you just focus on one thing and don’t enjoy the things around you, you will never be inspired and inspiration leads to many wonderful things both in your life and for those you share your life with. 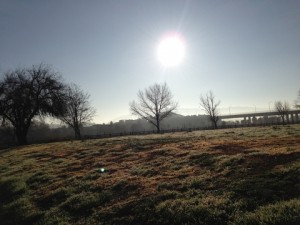 It is wonderful to be a success at what you do, but our world really needs people that are successful at helping others, giving back to the universe, and being there for people in need.  Wander, gaze around, day dream – you never know where you’re next inspiration will come from and please don’t think that day dreaming is just for those “creative types” because we really all are creative types. 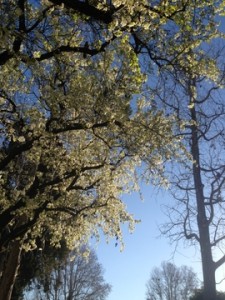 If Marie Curie or Albert Einstein hadn’t wandered a little bit off the beaten path of their lives, do you really think we’d be where we are today?  I don’t.  So, get yourself outside and enjoy the day!  I know I will.

If you would like help beautifying your life, think about creating a garden with me. You can call me at 661-917-3521, or visit my website. 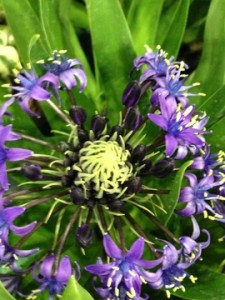 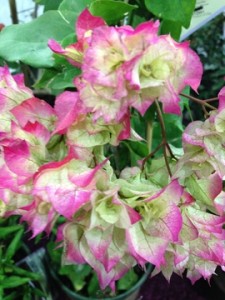 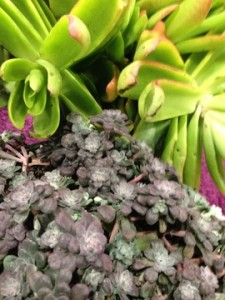 If you would like help beautifying your life, think about creating a garden with me. You can call me at 661-917-3521, or visit my all new BEAUTEOUS website. 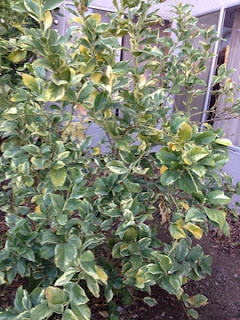 As a Landscape Designer in Santa Clarita, I really enjoy designing with edibles, this didn’t start when I became a Landscape Designer – it goes way back.  Some of my fondest memories are of picking blueberries and cherries in my Grandmother’s garden.  Although she didn’t have a lot of space, she always had a veggie garden (right next to the clothesline) about six or seven blueberry bushes, and a very big Queen Anne Cherry Tree.

All the grandkids would take turns picking those cherries.  We had a tall ladder, a rope and a bucket.  One of us would climb the ladder, sit on one of the conveniently located branches or branch crotches, pull the bucket up with the rope and fill the bucket.  Then we would lower it down to the rest of the crew to sort (eat) and put into containers for the house.  Repeating as necessary or until we got too full.  The blueberries were easier as they were on ground level (hmmmm maybe that’s why my brother always opted for the blueberries – though he won’t eat them from the store as they are “inconsistent”) We’d all swarm around the bushes with small containers eating more than we brought into the house for Grandma. 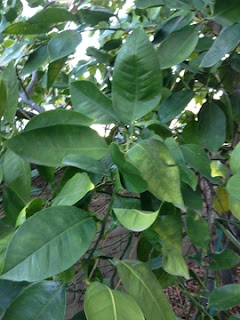 As you might understand it is difficult for me to get rid of a fruit tree, any kind of tree really, but sometimes you just have to do it.   Or so I thought.  I purchased an Oro Blanco Grapefruit and a Pink Lemonade Lemon tree from Papaya Tree Nursery about 14 years ago (geeze has it been that long?)  That was before I became a landscape designer and probably when I was still sort of in an east coast planting state of mind. I figured if it is citrus it is going to grow in my California home – after all we aren’t far from Fillmore, right? Well the Oro Blanco (which I placed right next to my living room window for the fragrance – between the house and a block wall for protection) has been a gem of a tree.  It is lush, gorgeous, and produces THE BEST grapefruits I have ever had.  My Pink Lemonade tree on the other hand has been a challenge.

I started out with the Pink Lemonade tree by the pool, after about six years of discolored leaves, fragrant blossoms but then fruit drop I decided to ask Alex from Papaya Tree what I was doing wrong.  That is when I found out (why didn’t his dad tell me years ago I’ll never know) that if I planted this tree in SCV, it needed part shade (what a citrus tree that wants part shade?)  So I moved it.  I put it about 20′ from the Oroblanco near another window, where it would receive some shade from surrounding trees.  I added another bubbler to that irrigation valve, fertilized and waited.  And waited, and waited, and waited.  Every year I would say,  “If this thing doesn’t stop dropping all its fruit, I’m going to pull it out and put in a … persimmon, jujube, (fill in the blank fruit) that I love.” 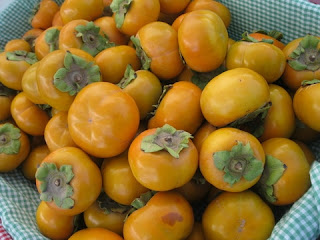 So this past summer, we had a house fire (we’re all okay) and were displaced from our home for three plus months.  Needless to say, many of my plants suffered but overall nothing looked too bad for neglect, except the citrus trees on the side of the house.  My kumquats (in pots by the pool) did just fine because I fertilized things when I could and watered fairly regularly (none of my citrus are on automatic water, I must hand water or turn the bubbler valve on – less water is better).  Anyway, the firemen and builders threw crap out of the second story window and off the roof and unfortunately the Oro Blanco and Pink Lemonade were hit.  The Pink Lemonade even took a direct hit, breaking off a branch or two.  This is the year I thought, she’ll never survive all this battery and neglect. 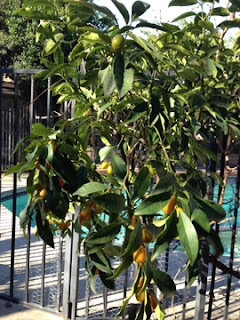 Well, (I’m sure you saw this coming) today I went out into the garden to take some #springtease photos and what did I find?  My first ever full size lemon on my Pink Lemonade Tree!  I guess my Last Chance Lemon thrives on neglect.  I’ll have to try to figure out what I can throw off the roof this summer, then maybe I’ll get two lemons! 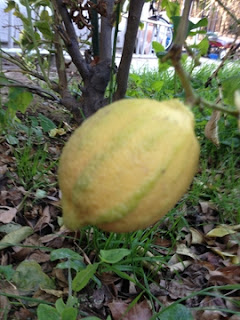 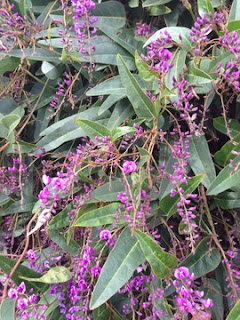 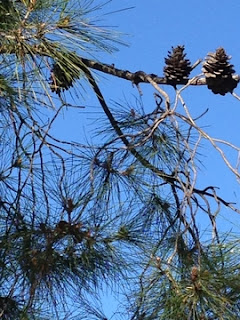 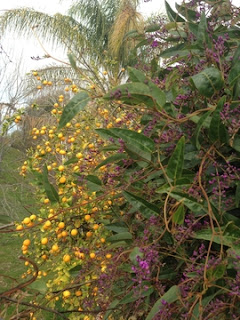 It is that time of the month again (or a little later) when being a Landscape Designer in Santa Clarita means I send you my list of chores for the month.  Read through, select what you need to do and discard the rest.  February is the reason that I moved to Southern California, we are the lucky ones working out in our garden while others are digging themselves out of the snow.  (My family included)

Here is the link for your February To Do List, so enjoy the sun, the breezes, and yes… the chores – we’re lucky to have them.

In addition to planning your veggies (#9) don’t forget that it is a great time to plan some beautiful Container Designs, and you might even pick up some pottery on sale since the new shipments will be coming in to nurseries during this next four weeks.

If you live in another part of the country, please tune in to the show I just taped with Joanne Mathis on the BlogTalk Radio show Artist’s Designers, and Things, Oh MY!  and find out what you can be doing to Prepare for Spring.